Born out of a desire to help parents take their children camping, fishing, hiking, learn about nature, and develop a conservation ethic, I created Kemp Outside to help people get outside!

If you have found this site because:

You are in the right place!  Welcome to Kemp Outside – Your inside source for all things outside.

Hi, I’m Kevin Kemp and this is Kemp Outside!  Thanks for visiting this site.  If you are here because you love the great outdoors, you are in the right place.  Here’s a little story about what you will find here.

I grew up camping, fishing and boating because my family was an outdoors family.  I developed a love for nature that eventually led me to Purdue University where I got my degree in wildlife management.  From 2003 to 2019 I had a career as a wildlife biologist with 15 of those years with the Florida Fish and Wildlife Conservation Commission.  I spent my whole career as a biologist trying to promote conservation and wise use and enjoyment of our natural resources.

In 2019 I left that career to join my wife Barb in the running of our small business, Kemp Design Services, a full-service graphic design and web marketing company.  While I love working for myself and growing my business, I still yearn to make a difference for the natural resources I love so much.

In 2015, our lives changed in an amazing way when we adopted 2 boys, ages 10 and 6 out of foster care.  I wanted them to grow up with an appreciation of nature, a love for fish and wildlife and a conservation ethic.  Getting started was easy for me, as I’ve been doing this my whole life.

From our home near Tampa, Florida, we explore all over the country – camping, fishing, boating, hiking and more!  We love to visit state and national parks as well as bodies of water large and small. 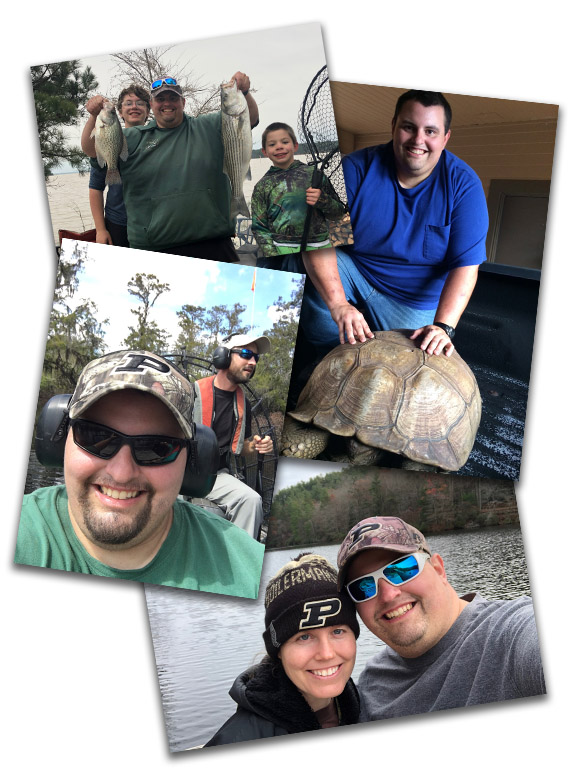 I believe the outdoors are for everyone.  In fact, nothing makes me smile more than scanning my Instagram or Twitter feed for photos of kids or people with disabilities enjoying nature – be it fishing, camping or just enjoying a sunset.  Yet as time goes on, less and less people are connected to the natural world.  The increased urbanization of America, the migration of people from a rural to suburban lifestyle and the advancement of technology means people must rely less and less on the land than they did just a few generations ago.  In 2005, Richard Louv coined the phrase “Nature Deficit Disorder” with his book, “Last Child in the Woods: Saving Our Children from Nature Deficit Disorder.” I’m a big believer in Nature Deficit Disorder.

Much has been discussed about Nature Deficit Disorder and though it is not a recognized disorder in the medical sense, it is a way to describe the costs to the individual, society and our resources of a life spent disconnected from the natural world.  Mobile devices and video games have replaced playing in the park and backyard forts.  With every generation that passes, less connections with the outdoors take place and worse, the value of wild spaces and wild species diminish.   As a wildlife biologist I had many discussions with colleagues about Nature Deficit Disorder, and I truly believe long term this threat is bigger than habitat loss or fragmentation, diminished water quantity or quality, invasive species or a myriad of other conservation issues.

As a biologist for a state wildlife agency, I was able to address many conservation issues.  I worked on projects that conserved and restored wildlife habitat.  I was a key member of teams involved in massive planning efforts that resulted in Florida’s State Wildlife Action Plan.  I even worked on national initiatives like the Teaming with Wildlife Coalition and the Alliance for America’s Fish and Wildlife, pushing for the passing of the Recovering America’s Wildlife Act in congress.  But as a state employee I never felt like I could tackle the issue that bothered me most – Nature Deficit Disorder.

As someone who grew up camping, hiking, fishing and boating, as well as developing a love for hunting and the shooting sports in college, taking my kids outside was a foregone conclusion.  But what about the parents who want to expose their children to the outdoors who didn’t grow up doing what my family did?  What about the single mom who has a child begging them to go fishing or the single dad who wants to take his kids camping?  I want Kemp Outside to be about helping moms and dads.  No child should miss out on the wonders of nature! Baba Dioum, a Senegalese forestry engineer once stated, “In the end we will only conserve what we love, we will love only what we understand, and we will understand only what we are taught.”  May Kemp Outside be a source of knowledge, understanding, and a love of nature.